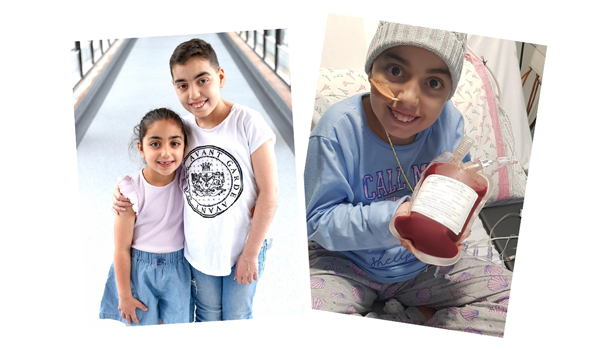 One warm spring day, a then bright and cheeky two year-old Alyssar didn’t seem herself. The sound of the toddlers high-pitched giggles turned into constant cries of pain and discomfort.

Her parents, Najah and Wassim grew increasingly concerned when their little girl didn’t get better and took her to their local medical centre, who referred them to the local hospital for a blood test.

Twenty-four hours later Najah received the call every parent dreads – to pack a bag and head straight to Sydney Children’s Hospital, Randwick. They had found abnormalities in Alyssar’s blood test.

Upon arriving at the Hospital, the family were met by Associate Professor Tracey O’Brien, Director of the Kids Cancer Centre, and Head of the Blood & Marrow Transplant program. Tracey and her team of dedicated specialists were onsite and ready to take care of Alyssar and give her the best possible treatment.

Alyssar was diagnosed with sickle cell disease, a disorder in which there aren’t enough healthy red blood cells to carry adequate oxygen throughout the body. Instead of Alyssar’s red blood cells being flexible and round, travelling easily through her body, they were distorted into sickle, or moon like shapes, blocking blood flow around her body and causing episodes of excruciating pain.

“Even though we were so scared and confused, seeing Tracey and her team immediately gave us a sense of relief and comfort. She was so calm, reducing our fears by helping us understand Alyssar’s condition,” remembers Najar.

As the years progressed, the staff at the Hospital became a second family for Alyssar, her sister Sara, and her parents. In addition to regular check-ups, every year Alyssar would be admitted to Hospital due to the severe episodes of pain associated with her condition – some stays lasting days, others lasting weeks. 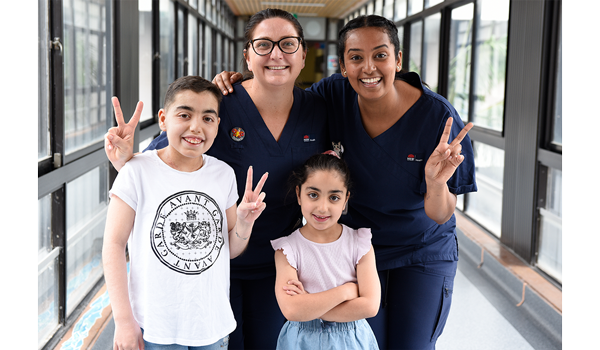 “As a parent to an ill child, we’ve had our ups and downs. You try and be strong but there are days when you just break down as the reality overwhelms you. But we’re still grateful. We have our extended family supporting us day-in dayout. We also have our second hospital family.”

After years of being closely monitored with regular hospital visits, Alyssar’s condition took a turn for the worse. Her only option was a bone marrow transplant. Thankfully, her sister Sara was a perfect match. At only six years old, Sara not only wanted her sister to get better, but was excited that she was the one who would ultimately help save her life.

“It made it easier that Sara was excited to help. Even the anaesthetist commented on how happy she was when they met in theatre, ready for her important procedure. Sara’s excitement made everything relatively easy. Knowing she was doing well and being looked after by people I trust meant I could focus on Alyssar.”

In the lead up to the transplant, Alyssar underwent high doses of chemotherapy to prepare her body for what was to come. It wasn’t easy watching their 9-year-old daughter, whose childhood had been defined by her illness go through some of the agonising side effects that came with the pre-transplant chemotherapy. But, Alyssar’s positive spirit got her through the difficult times and after a week in isolation, the day finally arrived. In April 2019 Alyssar received a bone marrow transplant. As her parents waited anxiously for some news, they remained hopeful this procedure would give their little girl her childhood back.

And they were right. The transplant was a success.

Alyssar still visits the Hospital once a week for check-ups, but after eight months off school, she was finally able to re-join her friends in the playground a couple of hours a day.

Thanks to your generous support of the Foundation, the Kids Cancer Centre is able to help give hope to kids like Alyssar. She now has the energy to do the things she loves and enjoy being a kid again.

“My hope for Alyssar is that she can have a normal life and have fun, just like other kids. I want her to not be in pain anymore and to live her life, not in fear but in hope. I just want her to be free,” added Najar.